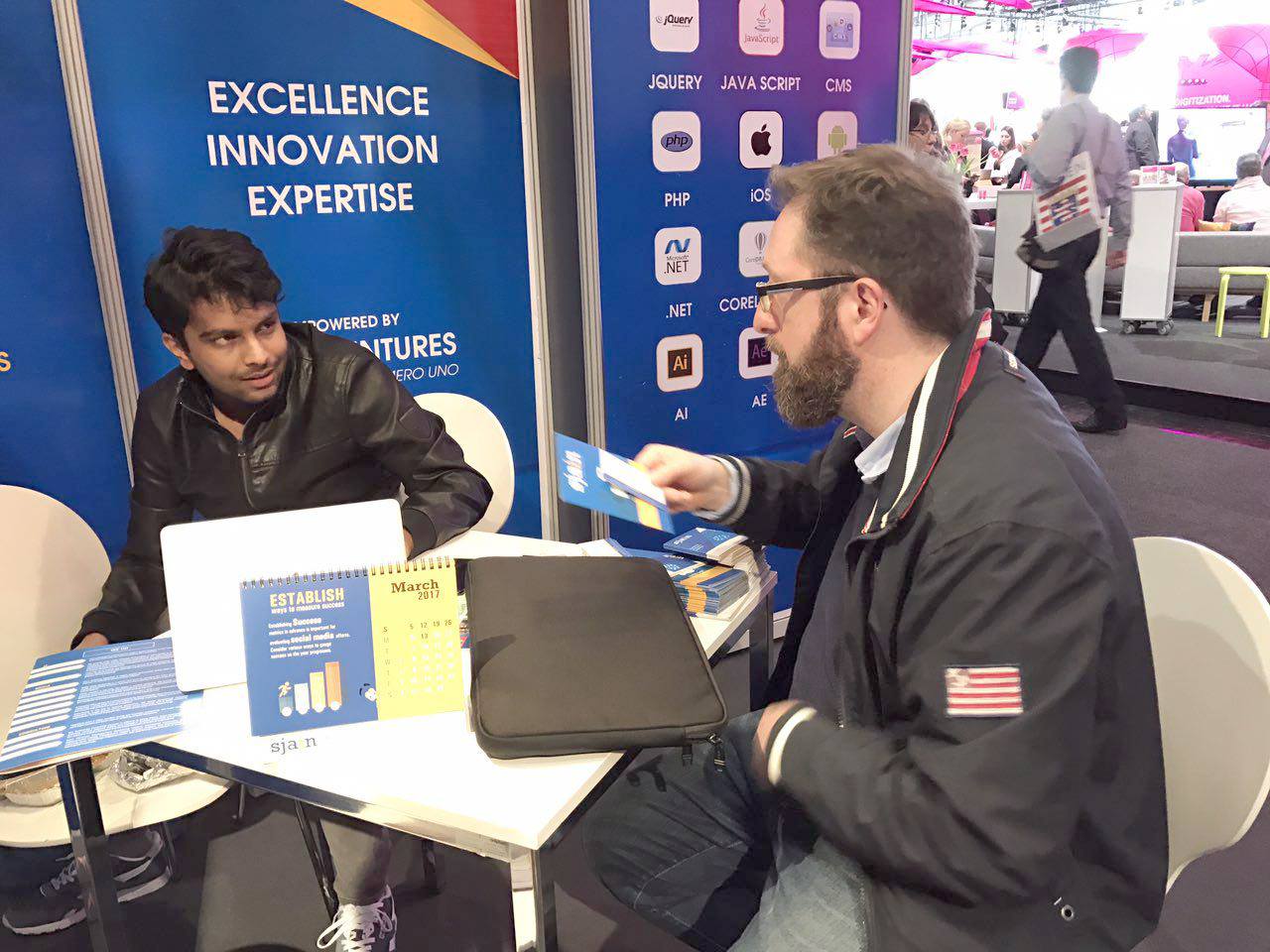 At Cebit (Center for Office Automation, Information Technology and Telecommunication) 2016, the world's largest business fair, Indian government has for the very first time selected Raipur's renowned founder of the IT Company, Shreyansh Jain, to represent Chhattisgarh. The business fair was held from 14th to 18th March nearly 3300 companies took part in the business fair and more than 2,10,000 people joined. Sjain Ventures played a very important role in research and technology development in order to give young people multiple opportunities. The leadership of young and experienced shreyansh Jain has played a vital role in the field of science and technology, with the help of their successful team. In this event out of all companies, Shreyansh Jain’s Sjain Ventures got selected for Technology Fair Cebit 2016 in Germany. 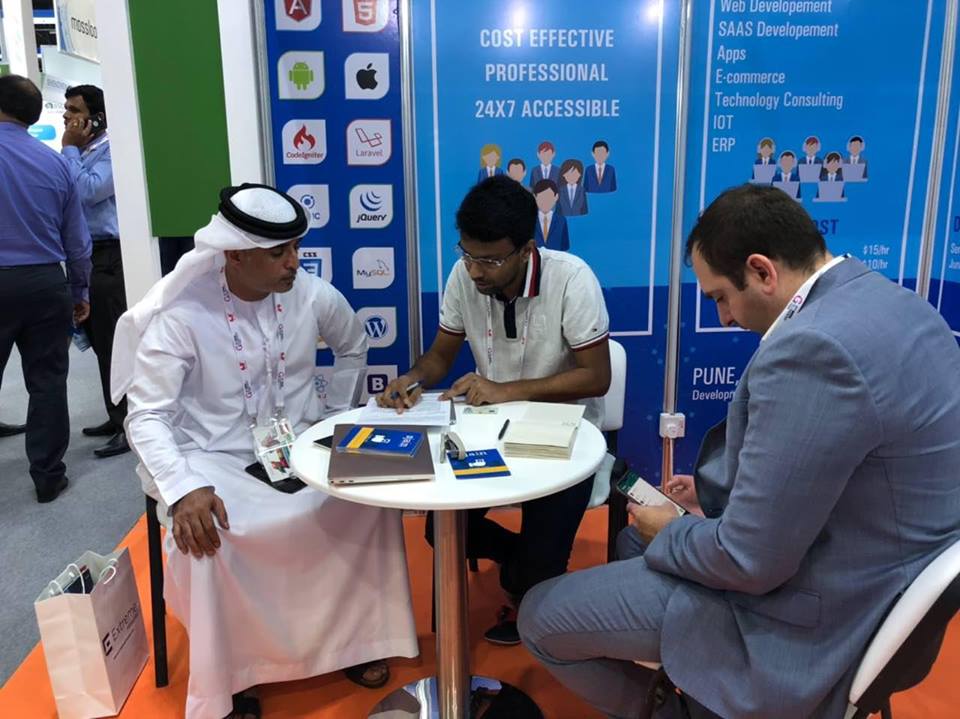 Sjain Ventures took part in the annual tech calendar GITEX 2019 during the most relevant week. Held in Dubai, this was a world class event. In this event the technology leaders of the world come together, companies and startups to demonstrate the future of every business and every industry. Sjain Ventures Founder, Promoter & Director Marketing – Shreyansh Jain and Director Finance Divya Jain attended the event showcasing their skills at Stall No. C-34, Hall No.8 to a significant number of visitors who turned to corporate partnerships and ventures , handled by our dedicated and outstanding team of Developers, Digital Marketers and Content Creators. In this prestigious GITEX community, Sjain ventures come out as a thriving business and have been able to attract a huge number of visitors / prospective customers from the world of tech enthusiasts.

I'm waiting to assist you

Simply use the form below to get in touch

In St. Paul’s School, Teghra there was organized a Science seminar in which IIT Student Gaurav mani suggest several tips for students of class 8th, 9th,& 10th to get maximum marks. R.N Chaudhary the principal of the school explained the usefulness of science. The program was conducted by Sunil Kumar.

From today begins the world’s biggest business fair Cebit (centre for office automation, information technology and telecommunication) 2016. For the very first time, the Indian Government has chosen Chhattisgarh which will be represented by Raipur’s renowned IT Company’s founder Shreyansh Jain. The business fair will be held from 14th to 18th March, in which almost 3300 companies will be participating and more than 2,10,000 people will be joining. In this event with the support of Chhattisgarh Government, Sjain Ventures will be playing a very big role for the development in research and technology and offering multiple opportunities for youngsters. For the development of research and technology, Chhattisgarh governance is encouraging all enterprises. Uplifting new techniques, the state government has organized Chhattisgarh InfoTech promotion society in November where various companies were nominated. Out of all companies, Shreyansh Jain's team were chosen for the world technology fair Cebit which is a proud dealer for our country. Young and experienced shreyansh Jain’s supervision has played a vital role in the area of research and technology, with the help of their efficient team. Shreyansh Jain with the support of state governance has planned to establish IT park in New Raipur, whose work will soon be started. With the establishment of IT Park more than 3000 unemployed, will be getting employment. The main objective of Sjain Ventures is to provide well equipped and the best services in the area of research and technology.

Shareholders in 5 companies with an annual turnover of 1.3 Crore, one will take years to achieve this much. But with dedication and determination Shreyansh Jain has achieved all this at the age of 20. Shreyansh was a student at IIT Mumbai pursued mechanical engineering. He inspired all those young minds who think differently in this world. We got a chance to know him in-person while in a conversation in Chhattisgarh. He shares that while studying in IIT, it was pretty much clear to him that he will be providing opportunities to others rather than working for someone else. In the year 2008 when he was just 17, he started working towards his first company QEA Eduvents Pvt. Ltd.
Shreyansh explains the goal of his company QEA was to provide guidance to those students who are preparing for JEE through seminars. His company has successfully conducted seminars in more than 400 Government and almost 1000 Private colleges. There were more than 200 IIT students associated with the company to provide guidance to students. The seminars held were sponsored by the organizers and were free for students. Shreyansh later says that Raipur was way too back in terms of growth and corporate sectors which inspired him for his second company DMS Infosystem which is a software based company. DMS fulfils all the needs and help the technicalities of the brands in Raipur. Lagging goodwill of competitive firms proved to be a good opportunity for shreyansh. Presently, there are 10 IIT students working for DMS.

In Hannover Germany organized a five days world trade fair Cebit( centre for office automation information technology and communication) 2016 in which Sjain Ventures limited has attracted people by representing Chhattisgarh on the global stage. To watch the new systems of information and technology a crowd of more than 2 lakhs people were gathered. From all over the world about 6000 leading institutions took part in this world trade fair. Fair was ended in 18th March. In this event out of all companies, Shreyash jain’s Sjain Ventures got selected for Technology Fair Cebit 2016 in Germany.

Sjain Ventures to Represent the state in the World Trade Fair

The Government has selected Chhattisgarh for World’s Largest Trade Fair in Germany Cebit ( Centre for office Automation , Information technology and Telecommunication ). The command to represent Chhattisgarh has been handed over to Sjain ventures the eminent IT company’s managing director Shreyansh Jain. About 3300 companies will take participate from worldwide, in this global trade fair in Germany. In collaboration with Chhattisgarh government , Sjain Ventures will establish new dimensions of expansions and change in the field of information and technology in the state. There will also be new employment opportunities for the youth in this region.

World’s largest trade fair Cebit(Centre for office automation, Information technology and Telecommunication) held in Germany ended the previous days. In this fair which lasted for five days, more than 2 lakh viewers came to view the new technology and information technology in Hannover, Germany. In this Global trade fair nearly 6000 premier institutes from all over the world participated and exhibited. Among them, Shreyansh Jain, Managing Director of Sjain Ventures and his team has the most effective and attractive stall and performance and has attracted people from other countries.